Weekly lotto: The winning numbers in last week’s lotto draw were 8, 15, 19 & 23. Nobody managed to match all four so the jackpot rises to €3,200. The weekly cash prize winners were Helen O’Driscoll and Conal O’Driscoll. Get your tickets HERE.

New jerseys for hurling and camogie teams: A big thanks to Centre Edengate and FITTR for their sponsorship of a new set of jerseys for our U14 camogie team and U13 hurling team respectively. New jerseys bring great pride and unity to a team and support them on their journey to lifelong fitness and friendship. Pictured below is Gordon Shaw from FITTR presenting the new jerseys to the U13 hurling coach Ciaran Ryan and Hugh and Dan O’Neill from Centra Edengate presenting the new jerseys to the U14 camogie captain. 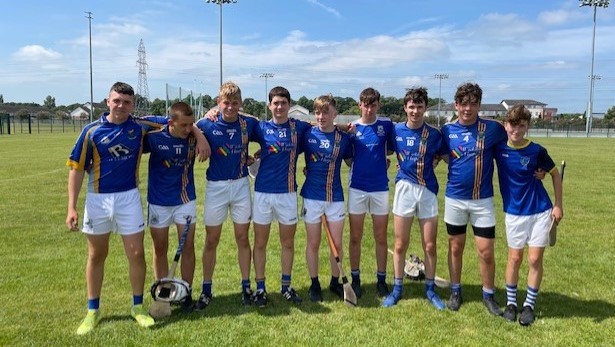 Both Kiltegan and Éire Og came into this encounter on the back of fine performances last weekend. The club from the Carlow border had a great two-point win over St. Patricks while the Greystones men had victory in their grasp only to see Glenealy gain a share of the points with a last gasp equalising goal.

Both sides had expectations of a win here and a rousing battle was anticipated. The opening five minutes was spent getting to know each other with defences on top in these early stages. Seanie Germaine broke the deadlock when he pointed a Kiltegan free after six minutes.

Éire Óg were back on level terms when corner-forward James Cranley converted a free coming up to the tenth minute.

Kiltegan were bringing a greater intensity to the game and the Éire Óg defence was coming under increasing pressure. A point from a line ball by Brandon Ryan, another from Eoin Byrne and a further pointed free by Seanie Germaine had Kiltegan ahead by 0-4 to 0-1 after 12 minutes and worth it.

Within two minutes the game was level. In a rare enough attack on goal by Éire Óg the Kiltegan defence was slow to clear the danger and Andy Walsh got through for the levelling goal. Germaine, who was unerring in his accuracy from frees, put Kiltegan ahead by a point at the first water break.

Andy Walsh’s goal had instilled a little bit more life into the Greystones side. Their half-back line of Eoghan Potts, Stephan Kelly and Peter Keane were coming more into the game. As a result, Éire Óg began to raise a bit more of a gallop.

Stephan Kelly brought the sides level again at 1-2 to 0-5. Centre-forward Anto Byrne had Eamonn Scallan’s men ahead briefly with a point. Seanie Germaine equalised from a free.

Byrne restored the Éire Óg lead again, and James Cranley extended it briefly to two with a point from play. But Kiltegan responded strongly with four points on the trot coming up to the half-time break. Another Seanie Germaine pointed free, a Sean Murphy point from play, another from Liam Keogh following a wayward pass in the Greystones defence and finally another Seanie Germaine point from a free. The score stood at 0-10 to 1-5 in favour of Kiltegan at half-time and it was still anyone’s game.

By half-time the weather had turned nasty, and the second half was played in steady rainfall. Seanie Germaine drew first blood in the second half with a pointed free in the opening minute. James Cranley responded for Éire Óg, also from a free.

Padraig O’Toole entered the fray from the bench with ten minutes gone. Seanie Germaine had a few frees off target at this stage possibly because of the deteriorating weather conditions.

Sean Murphy pointed from play for the Western side to restore the goal gap but Cranley, this time from play, again pulled back Kiltegan to two.

The Éire Óg men had become hugely dependant on James Cranley for their scores but they were still staying with Kiltegan. Cranley pointed another free after 20 minutes and when substitute Luke Dorgan scored another point it looked like we were in for a grandstand finish.

Two quick points from Padraig O’Toole and Kiltegan sub Arun Daly Danne left the western side breathing easier at 0-16 to 1-10.

Andy Walsh had a half chance of a goal, but his rising shot went over and Seanie Germaine, with his free taking sights back on line again, made the Kiltegan victory secure when he pointed a free three minutes into added time.

The final score stood at 0-17 to 1-11 for Kiltegan who have made great progress in rebuilding. They had a good campaign in 2020 and have delivered on last year’s promise.

It still depends on other results, but they appear to be in pole position for a semi-final spot. Éire Óg were never far away in this game, but they failed to keep their noses in front when they got there and didn’t really have enough fire power up front.